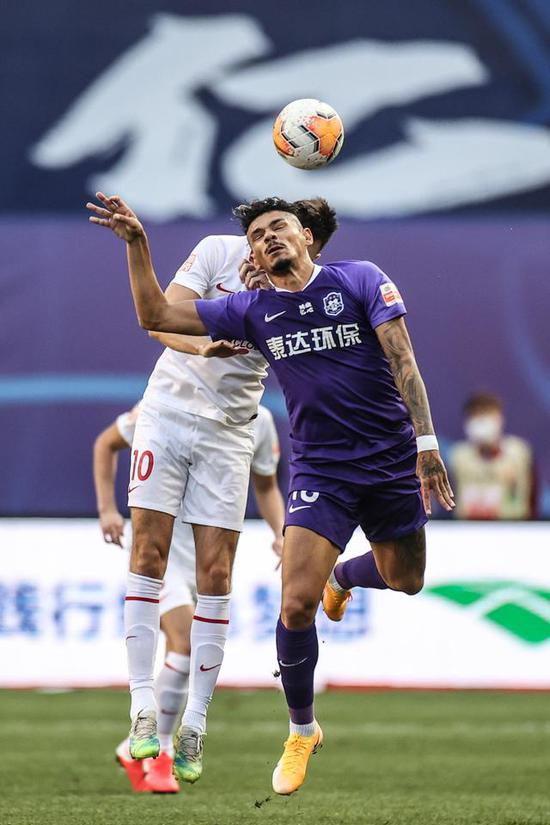 At 15:30 pm on October 16th, Beijing time, the first round of the Dalian Division's relegation group in the second stage of the 2020 Chinese Super League began. Tianjin TEDA team ushered in the first round of competition with Shenzhen Kaisa at Dalian Jinzhou Stadium. The "Relegation War" officially kicked off. TEDA's pre-match poster featured the word "Spell" as its theme. In the game, TEDA also really worked out, and the new aid Suarez played well, and the team finally played a rare good goal. Achim Peng's "Double Happiness", who coincided with today's birthday, scored twice, and TEDA, who won 2-0, finally won the league's first victory! And TEDA's first win is so important and timely, if it can keep the advantage in the second round after 5 days, the team will achieve the most "saving" relegation!

This game is Suarez's first start on behalf of TEDA. Although the run-in time is relatively short, high expectations are still placed. On the whole, the team also ranked the strongest team this season. Achim Peng and Ahmedov did not unexpectedly start. In addition, there are Zheng Kaimu and Rong Hao in the midfield, and the young defender Jiang Shenglong is U23. The players made their debut, partnering with Su Yuanjie, Bastians, Song Yue, Zhao Honglue, and goalkeeper Teng Shangkun.

In the 4th minute of the first half, TEDA scored a goal. Suarez got the ball from the front court and passed it directly to Achim Peng. The opponent goalkeeper Guowei made a mistake to form an empty goal. Of course Achim Peng would not waste such an opportunity. , A calm push for TEDA ushered in a dream start! Although Shenzhen Kaisa gradually stabilized, Suarez continued to put pressure on Shenzhen's defense. Even after losing the ball in the frontcourt, the TEDA team started an active counter-grab, making it difficult for opponents to create an offensive.

The leading TEDA team has been looking for an opportunity to extend the lead. In the 31st minute, Ahmedov went straight and Suarez followed up with a shot. The Shenzhen team defender cleared the goal line. The referee then ruled offside first, but this attack did indeed Very threatening; approaching the midfield, Li Yuanyi's kick near the penalty point was at a straight angle and was easily confiscated by Teng Shangkun. Soon after the referee Ma Ning blew his whistle, TEDA maintained a 1-0 lead at the end of the midfield.

At the beginning of the second half, the Shenzhen team obviously strengthened their offensive, but soon after TEDA ushered in a second goal, Zheng Kaimu picked a pass from the backcourt, Achim Peng quickly inserted a low shot, and the ball once again penetrated Guowei’s ten fingers. 2-0 lead! In the subsequent game, Teng Shangkun made several consecutive saves. The coach of the Shenzhen team also frequently changed players to seek opportunities, but the effect was very limited.

In the 75th minute, Achim Peng's cross hit the opponent's defender, and then Zhao Honglue followed with a shot that changed the line slightly higher than the goal, TEDA brushed shoulders with the third goal. In the subsequent games, TEDA overcame the opponent's continuous offensive under the condition of physical tightness and finally maintained the 2-0 score to the end. The league's first victory finally came, and it was so crucial!

Wang Baoshan: In the first game of the second stage, facing opponents who are stronger than us, the boys performed very well! In fact, before today’s game, due to our short time for training in this formation, I still have some anxiety in my heart, but the players performed very well tactically. The addition of Suarez has brought changes to our offense, especially as a fulcrum striker that has provided us with great help. He arrived in Tianjin on the 25th last month and ended the isolation on October 9th. In fact, he only trained with us 5 times, but he can understand this style of play well; as a U21 player, Jiang Shenglong faces This kind of stressful game also performed very well.

Achim Peng: I am in a very happy mood. I am also very happy to win the game on this special day of my birthday. We feel that everyone is working very hard to win the game. We prepared very well when we were in Tianjin. We all know how the current format is, so we know that this game is a life-and-death battle. If we don't want to "die", we must do our best to maintain our fighting spirit. Today all the players have shown their hard work and their desire to win.

First victory finally arrived! From the beginning of the season to the present, this 2-0 finally relieved everyone who cares about and loves TEDA! It feels a little unexpectedly smooth, but everything is reasonable. Since the club increased its commitment to relegation in September, everything is slowly improving in a positive direction. After Suarez finally reconciled with the team, the team can complete the tactical arrangement of the head coach. After the game, Wang Baoshan was also excited. Kneel to celebrate. The current TEDA team is also close to returning to the level it should be. The team and fans who have been depressed for so long now have reason to be cautiously optimistic!

Although the TEDA team's performance in the first stage of the league was not ideal, when the roster for the first round of the first round of the second stage appeared in front of them, many people may most intuitively feel that the TEDA team's lineup strength is not inferior. , Even slightly stronger than the opponent. Especially after Suarez joined the team, TEDA's central axis strength continued to improve. Although the running time with the team was limited, his role as a fulcrum on the field and the pressure on the opponent's goal were like a good medicine to solve the problem. There are many "stubborn illnesses", even better than Wagner's role in the formation. The player's worth is indeed expensive, and his presence can indeed help the team achieve the desired effect.

At the press conference before the game, the head coach Wang Baoshan specifically mentioned the offensive and defensive balance when talking about the team’s defense. It can be seen from the content of this game that when the team's offense is smooth, the pressure on the back line will be significantly reduced. At the same time, a good situation will also boost the spirit of the entire team. All players will be more involved in defense. To be positive, the team has more motivation to "fight". Throughout the link, Suarez still had to mention the role played by Suarez. He seemed to be a potent medicine to cure the various "stubborn diseases" of the TEDA team. Compared with the last few rounds of the first stage, he not only improved the frontcourt. The ability to handle the ball, while restraining the opponent’s defense also better activates other players, not only helped Achim Peng break the scoring drought, but also made Ahmedov more calm in the midfield, and the first stage was full. The criticized Zheng Kaimu also sent a wonderful assist, and the TEDA team finally returned to the normal state it should have.

This victory is of great significance to TEDA. It made a good start. The TEDA team is close to the goal of completing relegation, but the more at this moment, the more the spirit cannot relax, because the relegation battle is not over yet. . Five days later, at 3:30 pm on October 21st, TEDA will continue to compete with Shenzhen Kaisa in the second round. The time between the two matches is short, and the opponents have limited room for adjustment. This is for TEDA, which has recovered well. It is also a positive situation. However, in the next match, Zheng Kaimu will have four yellow suspensions. Under the condition that the opponent will definitely attack with all his strength, try to get a draw and relegation as much as possible. This is the goal of the TEDA team in the next game. (Jinyun News reporter Cao Ruizhi)